I wish it were possible to recognize at the beginning of our life’s story what an incredible journey we are truly on. If so, I would have sat down years ago and begun documenting all the ordinary and extraordinary events in this amazing life I have been blessed with. Sometimes, though, it may take just one more thing to open your eyes into the beauty of the life you have led and causes you to pause and truly count the blessings that are now so many they will never be enumerated.

If you are just joining us, please go back to September 2012 to get caught up.

How is he doing?

A loaded question that causes me to stop and think nearly every time.

This comes up in many different venues from close friends or family to complete strangers that seem to be in on our little extra chromosome secret.  Why is it loaded? Mostly because there are a million ways, it seems, to answer the question. Also, because I sometimes find myself more questioning the intent of the question, rather than taking it as just a question.

From a stranger…
When someone I have never met before strikes up a conversation about Sir Owen, I can tell quickly whether they see his almond eyes and Brushfield strokes. It seems to be those beautiful blues that tip people off to the 47th chromosome.  It almost always starts with a comment like, “He is so ________!” Fill in the blank with: precious, beautiful, special, handsome or smart. (yes, smart has been said. Apparently you can totally tell cognitive ability by the way he does long division in the shopping cart at Target while sucking his toes, but I digress…)

Regardless, when a stranger asks, it generally is my cue that they see that Owen has Down syndrome and that they too probably are part of the “club.” (See a friend’s awesome post on this phenomenon here).  It almost always leads to a cool connection to someone and it is nice to know that we are not alone out there in the world.  Comforting and encouraging. But, a little part of me is a bit surprise that someone noticed since I very rarely see DS when I look at my son. And that tiny piece of my being then begins to wonder how many people just see the DS when they see us out.

From an acquaintance…
When someone I don’t know very well asks, it can be for all the same reasons that a stranger might.  Often there is a connection they have to DS and they encourage me with a story or two about their cousin or friend and the amazing things they are doing.  When Owen was first born, this drove me insane.  Now, I look more towards the future and fear it a bit less, so I do find the stories encouraging. I like to hear the awesome things that people with T21 are doing and how normal life really can be. It is a nice boost to hear these days.

The only time I get irritated by this question is when someone I vaguely know asks it along with a sideways nod and concerned look.  You know, the one that is really asking: “How bad are things going, really?”  That always puts my on the defense and, depending on my mood, sends me into a monologue about how fantastic life is and how awesome he is doing.  Or it may get an abrupt, “He’s great!” before I move along.  This is the question that bothers me because there is that deep assumption (that I totally also had before I had Owen!) that because he has Down syndrome life must be awful and terrible.

From someone in the DS community…
Can be loaded…I think this actually more relates to how well I know the parent.  I have learned that just like in any community, there are people I identify with and people that I do not.  I have been incredibly fortunate to have met many families that I can share this experience with in an honest, vulnerable way.  So much so, that as I have branched out, I forget that the supportive groups I have come to know are unique and special for a reason.  If someone asks in some arenas, I know that I can give the real answers: the good and the bad.  They will cheer on the good and offer support and advice in the bad.  They will not judge my feelings, for they are just that, mine in that moment.

In some venues, however, it is a very different question.  There is a sense of comparison and need for validation.  There can be a sense that they are really only asking, because they know that their kid can do XYZ and O is not even close yet.   It leaves me with a sore tummy, generally, as it reminds me how natural comparison really is and how we really all just do want our kids to fit in, somewhere.  Anywhere.

Thankfully these are few and almost always online, but it is a reminder that even a generally welcoming and loving community as this still has all kinds of people in it.  Which also, as I consider that, probably speaks volumes to how TRULY AMAZING the DS community is.  We are a subgroup of the world that is comprised of people from every background, belief and status; yet, in my short blip of time on this journey, I have found it nearly all supportive and welcoming.  This is also why I generally chalk up this question being asked in “that” way to “one of those days of a special needs parent.” Because even when your kid is “doing awesome” you can still have those days.

From a close friend/family…
These are the moments of warm fuzzies for me.   These are the people who have walked this journey along side us from the beginning.  They concealed their fears and worries and have learned and grown in this with us.  They have really stepped up the the ultimate plate, in my opinion.  This has not been all fun and games and I have run the gamut of emotions since receiving our diagnosis.  I have not also been the consummate pleasure I believe myself to be (most days).  Yet, they have given me grace and understanding and time.  They have been a soft place to fall and our biggest cheerleaders.  I know that when one of these folks ask  “the question,” they want to know his progress. They want to know how I am feeling about it all.  They want to support us and let us know they care.  Whether it is an email, text or phone call, I know they are thinking of us and genuinely wanting to know how things are going – just like they are about anything in my life.

Generally, when people ask “How is he doing?” they really just want to know that they are thinking of us and hoping that everything is alright.  Aside from the few that are just nosy or trying to feel better about themselves, it is a great question to hear.  To know we have cheerleaders and supporters is great. To know that our little guy might give someone a different perspective or challenge their current thoughts or beliefs is also awe-inspiring.  Little people making big change.

And for the record, if you asked me how he was doing today….I would say he: has the greatest smile, is a terrible sleeper, has been pretty healthy, is getting molars, is getting close to taking independent steps/walking, is using several words, has us wrapped around his finger and has changed my life.

The book is done!

THE BOOK IS DONE! 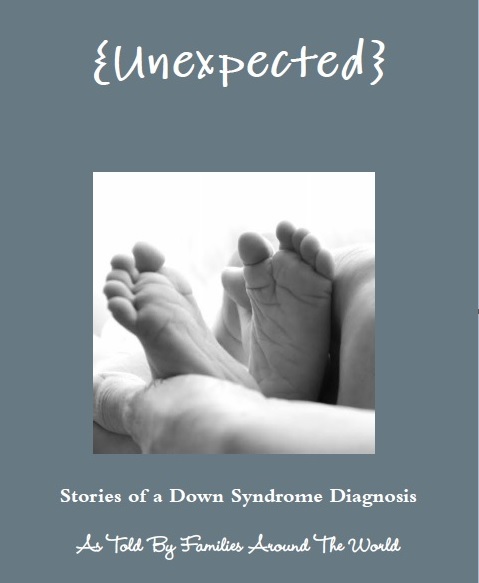 So it is out there an available for all in print and online:

Remember, it is still all available for free on our Unexpected website: www.missiont21.com and you can also get to it through our DSDN page!

A huge thank you to all the families that contributed stories so near and dear to their hearts in order to support new families. Nearly 100 moms (and dads!) around the world shared their diagnosis experience and although each story is unique, there are several themes and similarities woven throughout. Incredible.

Looking for a way to support our project?  SHARE it!  With your local organizations, hospitals, medical offices, libraries, churches, mom's groups-- anyone you feel may benefit for having this on hand when a new diagnosis arises! If you are interested in donating a print copy, I would be happy to help you direct it to a location near you, so please ask.

Creating this book was quite a process as I look back, but so worthwhile.  Thank you for all your support and love <3

Posted by Unknown at 6:56 AM No comments: